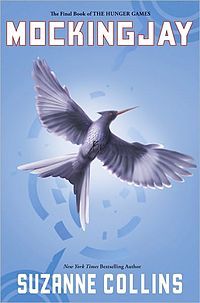 Synopsis: My name is Katniss Everdeen. Why am I not dead? I should be dead.
Katniss Everdeen, girl on fire, has survived, even though her home has been destroyed. Gale has escaped. Katniss's family is safe. Peeta has been captured by the Capitol. District 13 really does exist. There are rebels. There are new leaders. A revolution is unfolding.It is by design that Katniss was rescued from the arena in the cruel and haunting Quarter Quell, and it is by design that she has long been part of the revolution without knowing it. District 13 has come out of the shadows and is plotting to overthrow the Capitol. Everyone, it seems, has had a hand in the carefully laid plans - except Katniss.The success of the rebellion hinges on Katniss's willingness to be a pawn, to accept responsibility for countless lives, and to change the course of the future of Panem. To do this, she must put aside her feelings of anger and distrust. she must become the rebels' Mockingjay - no matter what the personal cost.

My Thoughts: Wow! I'm incapable of writing this review. I mean, how do you write a review of a book that you were so engrossed in that the world around you didn't exist anymore? That that world, and those characters, they all felt real. That is why I gave up on reviewing the Harry Potter series. Because there is no way you'll do justice to master pieces like these.

You know how there are authors who play with your hearts with their words? Like Nicholas Sparks. Suzanne Collins isn't one of them Because she plays with the readers mind. With her captivating story and amazing characters she had me drowning in the book.

Personally, I liked the second-half better. The first-half was good, but the second-half was amazeballs! After they go to Capitol, that's when I wasn't able to put down my book for even a second!

The story was amazing! I'm very happy with the way it ended and how it all played out. The suspense was really good and though I never actually cried, my eyes did tear up and my throat constricted in some parts. Which I think was harder because I have a sore throat so when it constricted it hurt a lot.

The characters, as I've said before, are amazing! They're so real! I don't think any other word explains them in a better way. And that's what's scary. That there are actual people like Snow or Coin. And the thing with the districts and the Capitol doesn't seem so unusual either. Because it's there, in the real world. In an altered way, yes, but it's there.

I don't think I need to talk about the characters separately, if you want to read that then you can read my reviews of the previous books (links above). I just want to say though that the way Ms Collins has written the book, it really influences you. I started thinking like Katniss. Which isn't really a good thing though... But I also felt what Katniss felt. I don't mean emotionally, I mean physically. Has that ever happened to you? I think it's really weird. When I read Catching Fire, there's a part where Katniss hurts her tailbone and when I read that my tailbone hurt too. And then in Mockingjay, Katniss had insomnia and I got insomnia too. Is this a coincidence or does the book play with my subconscious somehow that I feel what Katniss is feeling? I don't think this has ever happened to me any other time with any other book. Please tell me that has happened to you or am I going crazy?

Anyway, I really liked this book and over all this was an amazing series! I'd highly recommend it if you want to read an adventurous, thrilling book and are OK with violence.

“It takes ten times as long to put yourself back together as it does to fall apart.”

“There are much worse games to play.”

“Some walks you have to take alone.” Born in Hartford, Connecticut, in 1962, Suzanne Collins was the daughter of an Air Force pilot, and her family moved several times when she was young. After proving herself as a talented children's television writer, Collins published her debut book, Gregor the Overlander, the first book of The Underland Chronicles. In 2008, the first book of The Hunger Games series was published.