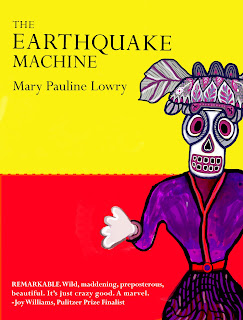 Title: The Earthquake Machine
Author: Mary Pauline Lowry
Publisher: AuthorHouse
Publish Date: 28 Feb 2012
ISBN: 1456795856 (ISBN13: 9781456795856)
Pages: 326
Links: Goodreads ~ Amazon
Summary: The book every girl should read,
and every girl’s parents hope she’ll never read.
The Earthquake Machine tells the story of a girl who crosses a river & leaves behind her family, her country, her language, her life; a girl who walks through rain forests alone at night, travels with bandits, rides a bus through a strange country, all to find her one true friend.

The Earthquake Machine, a fun, fantastical and exhilarating tale, explodes the distinction between Young Adult and adult coming-of-age novels, even as it explores the borders between the United States and Mexico, adolescence and adulthood, male and female, English and Spanish.

The Earthquake Machine tells the story of 14 year-old Rhonda. On the outside, everything looks perfect in Rhonda’s world, but at home Rhonda has to deal with a manipulative father who keeps her mentally ill mother hooked on pharmaceuticals. The only reliable person in Rhonda’s life is her family’s Mexican yardman, Jesús. But when the INS deports Jesús back to his home state of Oaxaca, Rhonda is left alone with her increasingly painful family situation.

Determined to find her friend Jésus, Rhonda seizes an opportunity to run away during a camping trip with friends to Big Bend National Park. She swims to the Mexican side of the Rio Grande and makes her way to the border town of Milagros, Mexico. There a peyote- addled bartender convinces her she won’t be safe traveling alone into the country’s interior. So with the bartender’s help, Rhonda cuts her hair and assumes the identity of a Mexican boy named Angel. She then sets off on a burro across the desert to look for Jesús. Thus begins a wild adventure that fulfills the longing of readers eager for a brave and brazen female protagonist.


About the Author: Mary Pauline Lowry has worked as a forest firefighter, screenwriter, open water lifeguard, construction worker, and advocate in the movement to end violence against women. Due to no fault of her sweet parents, at 15 she ran away from home and made it all the way to Matamoros, Mexico. She believes girls should make art, have adventures, and read books that show them the way.

Mary Pauline Lowry is currently a novelist, screenwriter, and regular contributor to the Huffington Post. When her novel, THE GODS OF FIRE, based on her experiences as a forest firefighter, didn’t sell, Lowry hopped on a plane to Hollywood and convinced Bill Mechanic to option the book for film. (Former CEO of 20th Century Fox, Bill Mechanic has produced films such as TITANIC, BRAVEHEART, FIGHT CLUB, & CORALINE). Lowry wrote the screenplay, and the film is now in pre-production.

Source: Got it from the author for review.

Cover Talk: The cover doesn't even begin to tell how amazing this book is! But it is definitely related to the story which is why I like it. Some books have covers that don't have anything to do with the story. I like how this cover is not one of them & it has a deeper meaning to it than what meets the eye.

My Thoughts: This book was a journey from girlhood to womanhood. It was like a roller coaster ride and I enjoyed it very much!

Starting: This book had me hooked from the start. I wanted to know about Rhonda. What would happen to her. What's the deal with her mother. And it got better and better as the story progressed.

Story: I loved the story. It was such a unique and amazing idea! I honestly think it's a must read for all the girls out there because a lot of them can relate to this.

Writing: Mary is an amazing writer! The way she described things in this book, it felt like I was really in Mexico going on the journey with Rhonda. All the feelings & emotions of Rhonda seemed so real! That is what made this book so incredible. That Mary was able to portray Rhonda's feelings in such an effective way.

Characters: There were so many likable characters in this book! I especially liked Jesus. He was such a sweet person, and I can see why Rhonda went all the way to Oaxaca to find him.
Rhonda is the main character of the book and you can really feel an emotional connection to her. I found myself wishing at times that everything would be alright for her. That she would get happiness. Rhonda is such a brave girl! And I really enjoyed her transformation from a girl to a woman. After all she went through, she deserved a happy ending.
The character I hated the most was Rhonda's father, from the start. He was an ass (sorry for my language but it's the truth) and he deserved what he got in the end (to know what, you'll have to read the book)!

Ending: I just love myself a happy ending! And after all that Rhonda went through, and the emotional roller coaster the reader has been through, this ending was the perfect ending and I wouldn't have had it any other way!

The Earthquake Machine is a book I will never forget. It is truly one of the most emotionally moving books I have ever read and I think this is a must-read for all the girls out there.


Favorite Quotes: ~That was what it meant to be a woman: to live in an unbearable agony hidden for a time
behind smoke and mirrors.~


~Most certain things are the most changeable.~

~There is pain in being a woman, yes, but there is pride in it, too.~ 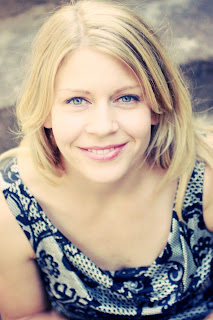 My Most Formative Experience

You can read more about Mary Pauline Lowry or to buy THE EARTHQUAKE MACHINE at www.marypaulinelowry.com

I’d heard about forest firefighting from my college roommate Della. She’d done a little local work as a forest firefighter in Colorado and her big sis Addie was on a Hotshot crew. Addie had traveled all over the country fighting wildfires and she could do 80 pushups. She was officially my hero.

As soon as I arrived at the Pike Fire Center up in the mountains I loved it. I was one of the only women on the 20 person Pike Hotshot Crew so it was really important to me to do a great job and keep up with the crew. A lot to times we’d work 24 hours or more in a row, hiking, digging fireline and breathing in lots of smoke. And often we stood alongside raging forest fires.

I wrote a novel about the experience called THE GODS OF FIRE. The book hasn’t come out yet, but it’s been optioned for film. I wrote the screenplay and there is a director attached to the project. (BTW, I think it’s interesting that there is about the same percentage of female screenwriters as there are female forest firefighters—only 10%!)

The first book I’m publishing is THE EARTHQUAKE MACHINE. It’s a wild fantastical ride that’s rooted in my adolescent longing to run away from home and have the kind of adventures that only boys are allowed…


a Rafflecopter giveaway
Posted by Unknown at 1:36 AM