In Rome, the college of cardinals assembles to elect a new pope. Yet somewhere within the walls of the Vatican, an unstoppable bomb of terrifying power relentlessly counts down to oblivion. While the minuted tick away, Langdon joins forces with Vittoria Vetra, a beautiful and mysterious Italian scientist, to decipher the lab labyrinthine trail of ancient symbols that snakes across Rome to the long-forgotten Illuminati lair - a secret refuge wherein lies the only hope for the Vatican.

But, with each revelation comes another twist, another turn in the plot, which leaves Langdon and Vetra reeling and at the mercy of a seemingly invincible enemy...

Cover Talk: I love the cover! It goes with the story perfectly. Plus the blue shades look so pretty. And the font, how "A" is written all fancy and then the other letters are simple, it really adds to the effect. But I found another cover that I like even better than this one. Here it is: 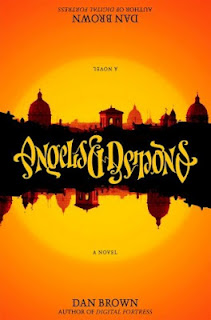 How cool is this? So cool, right? Even when you look at it upside down it says the same thing! It's exactly like the Illuminati symbols.

My Thoughts: I'm so glad my friend recommended this book to me! As you can see from the rating, I loved this book. BTW I'm working on making new rating pictures with half ratings too.

Story: Amazing! I mean really it was like I was on an adventure. This is probably the longest book I've ever read and the story is what kept me hooked. Plus in this 620 page book only one day passed by. But that day was filled with so much thrill & adventure & mystery that I almost wish I would've been there. I really enjoyed this book and I thank Dan Brown for writing it!

Writing: This is the only negative point I found in this book. Well not exactly negative. But the writer gave a lot of detail of each and every thing which sometimes made the book somewhat boring for me. As I said before, the story is what kept me so interested in the book. Plus there were sometimes words that I needed a dictionary for. As I said before, English is not my first language. That doesn't mean I'm bad in English, but then again since it's not my mother tongue, I'm not so good at it either. So this book wasn't exactly easy english for me. But still it was understandable.

Characters: Since Dan Brown gave such long back stories of the characters you couldn't help but feel connected to them. And so I felt connected to all the characters. Though I did not have a favorite from the book, I did like Ollivetti. Plus the other characters were nice too.

Twists: This was a book that kept me on the edge of my seat. It even had me holding my breath at times! Yes, it was that good! The suspense, the twists and turns, this book was filled with them.

Ending: This book had the bestest and most surprising ending ever! I mean really I did not see it coming. It was like a cherry on top of the cake. A perfect finish!

Comparison with the movie: I did not like the movie at all. Watching it was a waste of my time. I didn't like the cast. I mean Tom Hanks is so not how I imagined Langdon. It ruined the whole picture for me. Vittoria was ok I guess. Camerlango and Olivetti were fine too. I especially hated the changes they made. They cut out some of the most important things from the movie. And they didn't tell the whole story either. It was just all too confusing. My mom hasn't read the book, but she has watched the movie and she said she didn't understand it at all.

I'd highly recommend this to people who are in mood of an adventure ;) My MOCKs are starting from 16 & then I have externals in May so I won't really be reading anything. Thus, there won't be more Book Reviews till maybe June. I may review The Earthquake Machine as I've started reading it but nothing other than that. I plan on reading The Da Vinci Code in the summer vacations.