Title: The Hunger Games
Author: Suzanne Collins
Series: The Hunger Games #1
Publisher: Scholastic Inc.
Pub Date: July 1st 2010
Format: Paperback
Pages: 374
Genre: YA, Action & Adventure, Science Fiction Fantasy, Post Apoalyptic, Thriller
Links: Goodreads ~ Amazon ~ Book/Author Site
Synopsis: In the ruins of a place once known as North America lies the nation of Panem, the shining Capitol surrounded by twelve outlying districts. The Capitol is harsh and keeps the districts in line by forcing them all to send one boy and one girl between the ages of twelve and eighteen to participate in the annual Hunger Games, a fight to the death on live TV.
Sixteen-year-old Katniss Everdeen regards it as a death sentence when she steps forward to take her sister's place in the Games. But Katniss has been close to dead before--and survival, for her, is second nature. Without really meaning to, she becomes a contender. But if she is to win, she will have to start making choices that weigh survival against humanity and life against love.

Rating: 9/10
Source: Bought
Cover Talk: I love the cover! I love the mockingjay gold pin, and I love the tech font. And it totally goes with the theme of the book.

My Thoughts: Yes, I finally read it! And I really loved it! The story was amazing! It was different, yet showed the today world and I really liked the whole concept, though I found it vague sometimes.

The writing was brilliant. I loved the witticism used and really enjoyed reading Katniss's thoughts and Peeta's remarks.

I loved the characters! Katniss is such a strong character! She's a true role model and I admired her and appreciated her a lot! She difinitely made my list of favorite heroines. Peeta was really nice and sweet and though I did not develop a crush on him, I did like him. I loved all the minor chacters too and out of them Cinna and Haymitch are probably my favorite.

I can't wait to read the next book! I have a feeling It'll be better than the first one. Let's see if I'm right ;) Since 1991, Suzanne Collins has been busy writing for children’s television. She has worked on the staffs of several Nickelodeon shows, including the Emmy-nominated hit Clarissa Explains it All and The Mystery Files of Shelby Woo. For preschool viewers, she penned multiple stories for the Emmy-nominated Little Bear and Oswald. She also co-wrote the critically acclaimed Rankin/Bass Christmas special, Santa, Baby! Most recently she was the Head Writer for Scholastic Entertainment’s Clifford’s Puppy Days.

While working on a Kids WB show called Generation O! she met children’s author James Proimos, who talked her into giving children’s books a try.
Thinking one day about Alice in Wonderland, she was struck by how pastoral the setting must seem to kids who, like her own, lived in urban surroundings. In New York City, you’re much more likely to fall down a manhole than a rabbit hole and, if you do, you’re not going to find a tea party. What you might find...? Well, that’s the story of Gregor the Overlander, the first book in her five-part series, The Underland Chronicles.

Suzanne also has a rhyming picture book illustrated by Mike Lester entitled When Charlie McButton Lost Power.
She currently lives in Connecticut with her family and a pair of feral kittens they adopted from their backyard.

The books she is most successful for in teenage eyes are the Hunger Games, Catching Fire and Mockingjay. These books have won several awards, including the GA Peach Award. 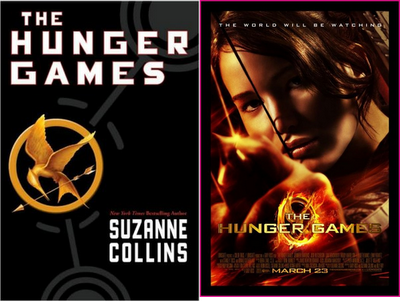 There's no competition, the book was definitely better. I think they did a good job picking the cast for the movie, and since I had watched the movie first I couldn't help but imagine the movie actors as the book characters. But I'm not satisfied with how they followed the story. I couldn't understand half of the stuff in the movie until I read the book. It's like the movie was made for people who had already read the book, just to guide them and help them imagine. But it was stll a nice try. I wonder how they would do in the next movie.
Posted by Unknown at 9:54 PM