Movie Review~Bokura Ga Ita (We Were There) Title: Bokura ga Ita (We Were There)
Writer: Based on the manga by Yuki Obata
Director: Takahiru Miki
Producer: Tomoko Yoshida
Main Cast: Toma Ikuta as Motoharu Yano, Yuriko Yoshitaka as Nanami Takahashi, Sosuke Takaoka as Masafumi Takeuchi, Yuika Motokariya as Yuri Yamamoto
Genre: Romance, Drama
Release Date: 17 March 2012 (Part 1), 21 April 2012 (Part 2)
Language: Japanese
Links: IMDb (Part 1, Part 2) ~ Wikipedia ~ Amazon
Synopsis: Nanami Takahashi is a high school student entering her first year. Immediately on her first day however, she becomes the victim of a practical joke by the school's most popular guy, Motoharu Yano, who coincidentally also ends up in her class. While the two get off to a rocky start, they soon find themselves falling in love with one another and begin dating. But their relationship is marred by Yano's past which includes the death of Yano's previous girlfriend, Nana Yamamoto, and the betrayal surrounding her death. To make matters more complicated her younger sister, Yuri, is in the same class as Yano and Nanami. As Yano struggles to come to grips with Nana's death and his unresolved feelings for her, so too must Nanami learn to understand Yano if the two hope to continue their relationship with one another.

My Thoughts: I loved this movie! I watched the anime first, and this is the first anime that made me cry. After watching the anime, which was half of the story, I came to know that there was also a movie, in 2 parts, which had the full story in it. Since I don't have enough time to read the manga, I decided to watch the movie to know what happens next.

The story is amazing! It's so sad and happy at the same time. Yano didn't deserve what happened to him. But I can't help but feel that in a way, it was his fault. And though Nana irritated me sometimes, I get that she was new at love and that's why she was confused.

All the characters were great! I had a love-hate relationship with Yano. I felt sorry for him and I knew that everything was out of his hands. But it pissed me off when he ran to Yamamoto again and again. Speaking of Yamamoto, I hate her! She made it to my character hate-list which is a big honor for her since it takes a lot of badness to get there. And she was bad. Sorry for my language but I couldn't help but think that she was a bitch.

I loved Take! I liked him more than I liked Yano and that is why I didn't want him to end up with Nana. He deserved someone who would love him as much as he would love her. And Nana loved Yano too much to ever love Take. So I wanted him to have a happily ever after. And I'm so glad he did!

The actors they picked were pretty good. Take and Yamamoto were spot on! And Nana and Yano were a bit different but they played their roles well and it didn't really bother me that much.

My favorite scene was when Yano is leaving and Nana is left behind on the train station and she gives a little speech in which, in the end, she says "We Were There". That made chills run down my spine. Yano & Nana's love was a beautiful disaster, and I loved going on this journey with them!

Now here are some pictures from the movie: 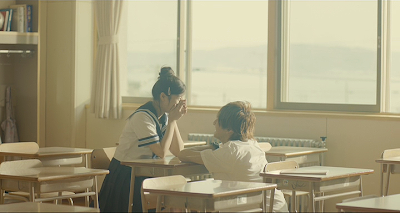