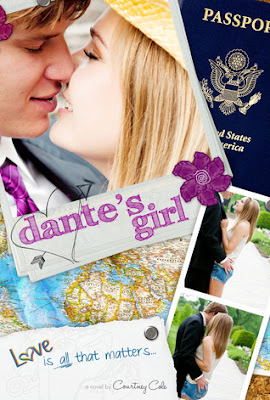 Synopsis: I have spent every summer since I was ten years old with my father in London. Every summer, since I was ten years old, has been uneventful and boring.
Until this year. And this year, after a freak volcanic eruption strands me far from home, I have learned these things:1. I can make do with one outfit for three days before I buy new clothes. 2. If I hear the phrase, “You’re not in Kansas anymore, Toto,” even one more time, I might become a homicidal maniac.3. I am horribly and embarrassingly allergic to jellyfish.4. I am in love with Dante Giliberti, who just happens to be the beautiful, sophisticated son of the Prime Minister of a Mediterranean paradise. 5. See number four above. Because it brings with it a whole slew of problems and I’ve learned something from every one of them.Let’s start with the fact that Dante’s world is five light-years away from mine. He goes to black-tie functions and knows the Prime Minister of England on a first name basis. I was born and raised on a farm in Kansas and wear cut-off jeans paired with cowboy boots. See the difference? But hearts don’t care about differences. Hearts want what they want. And mine just wants to be Dante’s girl. My heart just might be crazy.

Cover Talk: I LOVE the cover! It's so cute and matches the book perfectly! The little details like the map and passport and the quote and how the pictures and other stuff are attached to a board by thumb stacks looks so cool! And the models look exactly like how I imagined the characters!

My Thoughts: Dante's Girl was a quick and fun read. I was in the mood of a light romance so I'm glad I chose Dante's Girl.

The story feels like it's out of a Korean drama! There is a chaebol male lead, a small-town female lead, insta-love, an evil girl who wants to have the male lead etc. Seriously, throughout the whole book I kept thinking this is so much like a Kdrama! But I did enjoy it. The story was unbelievable and fantasy-like but sometimes you have to let the reality go so it worked in this book.

The writing wasn't something special and I don't know if I'll be picking up anything else by this author or not. But the book did feel like it wasn't edited a lot. Like the author didn't want it refined, she wanted it to be like how she first wrote it. And I honestly didn't have a problem with that. Sometimes it was fun to read it like that too.

Despite the story being like that of a Kdrama, the protagonist isn't the typical Kdrama female lead type. She has American written all over her. I'm not sure if I liked her much though. She was OK. But I liked how she accepted her mistakes and short-comings and when she acted stupid, she admitted that. One thing I would like to mention here is that I think the author tried to emphasize her "Americanism" too much. I get that she was in a foreign country and the author "showed" how different she was but why "tell" so much? It also felt like she was defending Americans. But for what?

Dante. Oh, Dante, Dante, Dante... I don't think I've ever read about such a sweet sweet boy. But he's a believable sweet boy. I don't know if such boys exist, I haven't met any, but it would be nice to meet such a boy. Dante is a really nice, gentle-man like, rich boy with a perfect body. Fantasy much? But he's not completely perfect. For example, he can't stand up to his father to tell him what he really wants to do. But other than that he's perfect.

Elena was your typical evil, rich girl. She didn't really play much of a part in the book though. Reece let her get to her without her having to do anything much which made me really angry at Reece. Dante's other friends were nice. Mia was likable and that other guy, the Casanova (I don't remember his name), was funny. Nate was also a typical villain. I don't remember any other characters...

The romance was... well, it was insta-love so what can I say? I'm not much of a fan of insta-love or love at first sight. I just don't believe in that stuff. But for some reason it didn't bother me much in this book. I think that's because I picked up this book to relax myself and I was OK with anything as long as it wasn't angsty (I don't think that's a word but oh well *shrug*) so the insta-love thing didn't matter.

All in all, this book was a nice, quick read for a summer day. It wasn't that memorable but it'll help you pass a few hours. :)

Courtney Cole is a novelist who would eat mythology for breakfast if she could. She has a degree in Business, but has since discovered that corporate America is not nearly as fun to live in as fictional worlds.
Every Last Kiss is her debut novel and she followed it with the rest of The Bloodstone Saga (Every Last Kiss, Fated, With My Last Breath and My Tattered Bonds). Courtney lives in quiet suburbia, close to Lake Michigan, with her real-life Prince Charming, her ornery kids (there is a small chance that they get their orneriness from their mother) and a small domestic zoo. Learn more about Courtney and her books at www.courtneycolewrites.com
Posted by Unknown at 5:49 AM