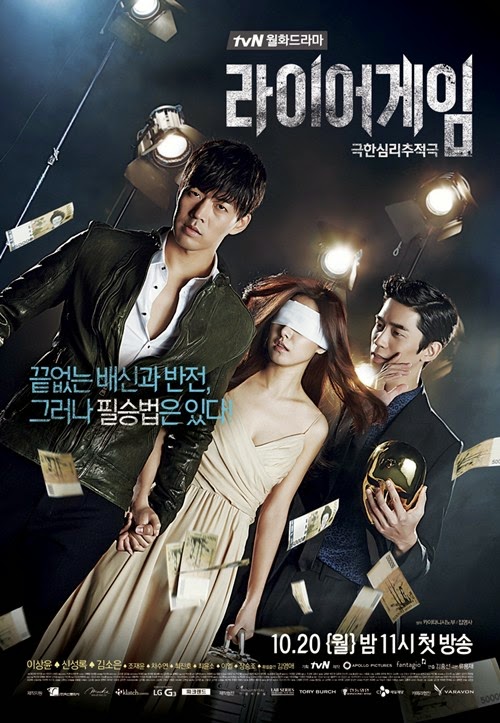 Synopsis: Nam Da-jung is an innocent college student who is sent a mysterious note inviting her to join the reality show Liar Game, a psychological survival game wherein participants trick each other and the one who ultimately succeeds wins the prize money of ₩10 billion (US$9.3 million). Tempted with the chance to pay off her debts, Da-jung joins the game and gets conned out of the initial money given to her. In desperation, she asks genius ex-con swindler and former psychology professor Ha Woo-jin to help her win the game.

I went into Liar Game without any expectations but I was pleasantly surprised. It was one hell of a drama! I haven't seen the Japanese version so I had no idea about the story. But I read that the Korean version is different from the Japanese. Either way, the drama was really good!

Story: I was hooked from the beginning to the end. It was all really very interesting. The games, how the players tackled the situations, especially the mystery about Kang Do Young. It always kept me on the edge of my seat and guessing what would happen next. But I never expected what did happen. My favorite part was definitely the games. The pure genius of the games and then the genius of the players, especially Ha Woo Jin, was so exciting to watch! Story wise, this drama was great! It had perfect pacing and there was never a dull or boring moment.

Actors/Characters: All of the characters were really well-written and the actors did a great job playing them. Ha Woo Jin was such an intriguing character. He was a genius and I was very impressed with how he thought. But the best part was that he was a softie at heart which was sweet. That didn't stop him from being super cool. He was someone whom if I met in real life I would be in awe. Lee Sang Yoon did an awesome job playing him. I haven't seen any of his other works but to me, I feel like he will always be Ha Woo Jin.

Many people were angry at Nam Da Jung and said that she was stupid. But I didn't feel like that. She seemed very real and honestly if I, or any other person (unless they were really cunning & smart) would have been in her place we would have easily been played as well. I like how she matured though. She became more confident and smart but still kept her innocence. Kim So Eun did a good job in this role. I've seen her only in Boys Over Flowers and I loved her there. While her character in Liar Game wasn't that different from her character in BOF she did do a good job and was likable and relatable.

My favorite character was Kang Do Young and Shin Sung Rok is the reason I started this drama in the first place. That man plays creepy characters so well it actually scares me! No one could have played Kang Do Young better than Shin Sung Rok. Kang Do Young was such a mysterious and creepy character but also cool in a way little kids find superheroes cool. Or maybe I was the only one who felt that way about him... I always did like the villains better... Anyway, there's no doubt that he was a very interesting character and from day one you start wondering: who is this man? What is his story? How is he related to everything? What game is he really playing? You can never guess though. Some of his scenes really scared me, the ones in which he "took off his mask" and showed his true face. But at the end I felt so sorry for him, no matter how twisted he was. I've seen Shin Sung Rok in You Who Came From The Stars and Trot Lovers. He did a great job in both but in the former he played a similar scary psychopathic character. He was awesome in that one but I liked him better here. Maybe because his character had more depth in this drama. Either way, Shin Sung Rok is awesome!

Out of the side characters I really liked Jo Dal Goo. He added some laughs to an otherwise serious drama. And I liked his relationship with Nam Da Jung. He was a nice guy and I felt sorry for him. I hated Jamie at first but she redeemed herself and I even somewhat admired her (especially after the President Game). I don't know why but I found Lee Yoon Joo (PD) and Director Jang really irritating. I'm guessing the latter was supposed to be that way but I didn't like Yoon Joo any better either. I really liked Choi Sung Joon and Lee Shi Hoo did such a good job! He is so adorable! The other characters were good too and the actors played their part well.

Ending: My thoughts are really conflicted about the ending. On one hand I'm hating that it ended at a cliffhanger. I need to know what happens next!!! How could they end it like that?? On the other hand I'm happy because this means that (hopefully) there is going to be a second season. If there is then I hope it comes out soon.

Overall: I loved this drama! It was a great psychological thriller that really kept me on the edge of my seat. It was a thrill to watch! Highly recommended!
Posted by Unknown at 3:31 AM