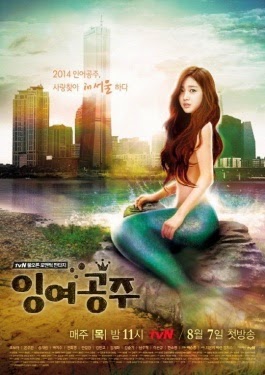 Synopsis: Ha Ni is a mermaid princess in the underwater empire, but she falls in love with Shi Kyung, and for him she becomes a human being and begins to live at the In Gyeo House. The house is for people who are preparing to land their first jobs. To permanently become a human being, Ha Ni must make Shi Kyung love her within 100 days.

My Thoughts: I liked this drama so much! It sucks that it got cut so short and got ruined because of that.

Story: When I read the synopsis I wasn't really sure what to think about this one. It seemed absurd but interesting so I decided to give it a try. I loved it from the first episode! The story was unique and the writers definitely took a lot of risks but it was great! Even though it started out as Ha Ni looking for love and turned into Ha Ni looking for a job and many people didn't like that but I was okay with it. I loved all the parodies and references! It was all so funny! It was a really good blend of humor and seriousness. The sad scenes were sad and brought tears to my eyes, the funny scenes were funny and made me laugh out loud. It was all balanced out really well. Until they cut down the episodes and the writers were forced to rush the ending which ruined everything. But more on that later.

Actors/Characters: All the characters, even the minor ones, were awesome! And all the actors did a great job playing them!

I've only seen Jo Bo Ah in Shut Up Flower Boy Band. I always thought she was pretty but her acting was okay in SUFBB. So I was very surprised to see her do such a wonderful job in Surplus Princess! She was so funny and lovable! Her character, Ha Ni, especially at the beginning, was a spoilt brat. And I should have hated her. But I didn't. Because Jo Bo Ah made her character so likable and believable that I couldn't hate her. She was so endearing and hilarious and adorable! I loved her!

I loved Song Jae Rim! I'll admit I had never seen him or heard of him before. But I loved him in Surplus Princess! Not so much in the beginning, but Shi Kyung won me over after a few episodes. Song Jae Rim acted really well! And I loved his character! His character was well-written and had depth. I desperately wanted him to be the male lead. He had such great chemistry with Jo Bo Ah.

Honestly, Hyun Myung felt more like a side character than a male lead. And he seemed more like a friend to Ha Ni than a lover. He was like an oppa to her, and I mean in a brotherly way. On Joo Wan was okay, I guess. I didn't like his acting much. Hyun Myung as a character was okay too. I never felt much for him. I often felt like the other side characters were more important than him. He did not seem like a male lead at all.

The second female lead, Yoon Jin Ah, was so annoying and evil! I hated her! And that means Park Ji Soo played her well. But not well enough. I'm pretty sure somewhere through the hate I was also supposed to feel sorry for her. But I didn't. I only hated her. She was so low, I really couldn't feel sorry for her. Because all the decisions that got her where she was, she made them herself.

I adored all the side characters! I loved Hye Young! She was so cool and such a good friend! She was a really fun character and she and Big were so cute together! Ji Yong was so funny! I loved him! He was hilarious! Sun Kyu was awesome and the actor who played him did such a good job! Jin Ah's boss was so funny and awesome! And I loved the JH owner and her interactions with Ahn Ma Nyeo! Speaking of Ahn Ma Nyeo, how cool was he?! And Ahn Kil Kang did such a good job playing him! One of my favorite side characters ever!

Romance: I was really really hoping that the writers would take the other road, take this risk along with the others they had taken, and make the girl end up with the second lead. They had better chemistry and looked better together. I really loved Ha Ni and Shi Kyung. And the writers didn't have much time to develop Hyun Myung's and Ha Ni's story anyway. So why not take the already developed couple and make them end game? It's not like the ratings mattered anymore, the drama was already ending. But to my disappointment the writers took the conventional way. Oh well, we can't all have what we want.


Ending: I was really disappointed with the ending. Not only was it rushed,  I would've liked it much better if Ha Ni would've ended up with Shi Kyung. They also left it kinda open-ended. Don't get me wrong, they did resolve almost everything. But they ended it as if they were planning on a sequel and with answers they also left us with more questions.

Overall: I really loved this drama! Even though it was only 10 episodes long I really bonded with the characters and loved the story and humor. It was a great drama that I could relax to. I wouldn't particularly recommend it because the ending sucks but if you want something light with great humor then I think you should watch it.
Posted by Unknown at 12:00 AM