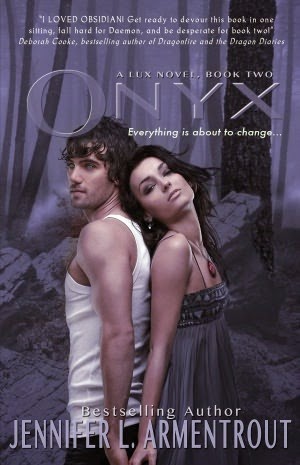 Synopsis: Being connected to Daemon Black sucks…
Daemon’s determined to prove what he feels for me is more than a product of our bizarre connection. I’ve sworn him off even though he’s running more hot than cold these days. But against all common sense, I’m falling for him. Hard.Our relationship issues aren’t out biggest problem…The Department of Defense is here. If they ever find out what Daemon can do and that we’re linked, I’m a goner. So is he. And when a new boy shows up a school with a secret of his own, things get complicated fast. I need to choose between my own instincts and Daemon’s.But then everything changes…I’ve seen someone who shouldn’t be alive. Daemon’s never going to stop searching until gets the truth. What happened to his brother? Who betrayed him? And what does the DOD want from them—from me?No one is who they seem. And not everyone will survive the lies.

I'm afraid this book gave me a case of Second Book Syndrome, which I believe is a first for me. It sucks because I really I really loved the first book! But this one was so disappointing that I even considered dropping it, which I hardly ever do. But I forced myself to go through with reading it all in the hopes that it might get better. Alas, my hopes were shattered and this book sucked big time.

Story: Wash, rinse, repeat, that is what the romance part of the story was. I was so sick and tired of all the miscommunications and "I don't love hims" and "It's the bond" and all the other excuses Katy was making. I really didn't get her reason for being so against the relationship. Sure, he was a jerk to you but come on! If you like him and he likes you back and he apologized and he's being nice then what the hell is the problem with you! I swear, Katy was so infuriating in this book! But more on that later. Now lets move on from the crappy romance and to the alien side of the story. Well hello love triangle, where have you been? Oh and I didn't see that one coming, the second guy being some supernatural thing too. (That was sarcasm BTW, if I wasn't able to convey it right.) There was so much stuff I didn't like in this book, I would be telling you half the book if I started listing them down. Lets just say the story was extremely annoying. And Katy sweety, if your instincts are telling you something's wrong please listen to them. And Daemon darling, if you have limited time you don't stand there and kiss your girlfriend and say cheesy lines. You grab her hand and you run!

Writing: The writing was okay. Compared to the story it wasn't that bad. But I did have some problems with it. Firstly, most of the time the writing was pretty detailed (which put me to sleep sometimes) but sometimes it skimmed over stuff which seemed so weird and out of place. I was like, did I miss something or skip over a paragraph? But no, the author decided to go on super speed through that part. One other thing that really bothered me was the way Katy addressed people in her head. She called them "the girl", "the boy", "the man", etc. If I know someone and was thinking about them in my head I would call them by their name not "the girl" or whatever.

Characters: Katy was such a huge disappointment in this book! Whereas I loved her in the first book, she was unbearably annoying in this one! She was so confused and it went on throughout the book which got so irritating. She was constantly like "I like him." "I don't like him." "It's my fault." "It's not my fault." "I'm doing the right thing." "I'm not doing the right thing." She was just so confused all the time that I wanted to slap her and tell her to be sure about her decisions for once! And Katy was so stupid. I cannot believe that she could be this stupid. She was just... ugh!

Daemon. *sigh* Daemon, Daemon, Daemon. I had such high hopes for you. Oh how I was fangirling so hard over you when I first met you read about you. But look at me now. I really couldn't stand you. Dude, you are such a jerk that even your good looks couldn't save you from being ugly. Daemon turned me off big time. He was being way too controlling. And what's with the 'ruining Blake's name' thing? It was funny the first few times but it got so annoying I wanted to slam a chair on Daemon's head. And I can't believe Katy kept correcting him! Like it's obvious he's doing it on purpose. Why keep correcting him? Isn't it better to just ignore him?

Blake was... well Blake was weird. I knew something was up with him from the get-go. Only Katy can be stupid enough to not realize that. Well anyway, there's not much to say about him. Or any of the other characters. I was so busy being frustrated with Katy & Daemon that I didn't really notice the other characters much.

Romance: Communication, people! Communication! That is the key to a healthy relationship. But apparently Katy & Daemon didn't get that memo. So they talked about everything else except their relationship. And both of them loved assuming what the other person meant, or needed, without directly consulting them. Because who needs to talk, right? When you can have so many misunderstanding by not talking.

Overall: This book was a HUGE disappointment! I don't think I'll be reading the next one. But it could only be me and you might actually like it. So if you do decide on reading it, I hope it doesn't disappoint you as much as it disappointed me.

# 1 New York Times and USA Today Bestselling Author Jennifer L. Armentrout Lives in West Virginia. All the rumors you heard about her state aren’t true. Well, mostly. When she's not hard at work writing, she spends her time, reading, working out, watching zombie movies, and pretending to write.She is the author of the Covenant Series (Spencer Hill Press), the Lux Series (Entangled Teen), Don't Look Back (Disney/Hyperion) and a yet untitled novel (Disney/Hyperion), and new YA paranormal series with Harlequin Teen. Jennifer also writes New Adult and Adult romance under the pen name J. Lynn. The Gamble Brothers Series (Tempting the Best Man/Tempting the Player) and Wait for You. Under her pen name, she is published with Entangled Brazen and HarperCollins.
Posted by Unknown at 12:00 AM