It's finally here!! The moment we all have been waiting for! *insert drum-roll* Today is the release day of Timeless by Michelle Madow!! I could not be more excited right now! :D

"The combination of time travel, magic, and love makes Timeless an unforgettable page turner!"
-For Those About to Read
"Timeless had great twists, particularly towards the end. For something inspired by a Taylor Swift
song, Michelle has come up with a great series!"
-Addiction to Words Reviews

"Just when I think I know what to expect, Michelle throws me a curveball! It was spectacular. And
marvelous. And a little bit daring, which is what makes Timeless stand out so much!
-Sparkles and Lightning

IT'S A RACE AGAINST TIME.

In Remembrance, Lizzie and Drew changed the course of fate so they could be together.

In Vengeance, Chelsea set fate back on its original, deadly path.

Now, strange things keep happening to Lizzie. Things that are omens of darkness to come. A curse has
doomed her to die an early death, just as she did in her past life. To make things worse, even if she can
figure out who cast the curse, it's irreversible. There's only one option left for her to save herself. It's
crazier than anything she's heard yet, and to do it, she'll need Drew and Chelsea's help.

Because to make things right, they must go back to when it all began …

About the Transcend Time Saga: 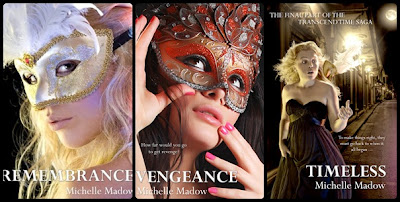 The Transcend Time Saga is about a high school student named Lizzie who has been reincarnated from Regency Era, England, but doesn’t realize it until she meets her soul mate from the past and he triggers her memories to gradually return. The series began with Remembrance (published July 25, 2011), and continued with the short story Vengeance (published December 8, 2011). The series has sold a significant number of copies so far, and has received much praise from reviewers.

Quotes from Reviewers about REMEMBRANCE

" If you were to take a dash of Romeo and Juliet, a handful of Pride and Prejudice, and a pinch of a Disney fairytale, you'd probably come up with Remembrance!"
-Gilbert & Gomez

"I enjoyed everything about Remembrance. The dialogue was fantastic, the pace moved perfectly, the romance was charming, and the story was brilliant!"
-Shortie Says

Michelle Madow was inspired to write Remembrance after seeing Taylor Swift's "Love Story" music video while a junior at Rollins College in Winter Park, FL. The song and video gave her the story idea about a high school girl reincarnated from Regency Era, England. She handed in the first chapter as a homework assignment for class, and when her teacher and classmates wanted her to continue writing, she decided to go for it. By the end of the school year, her first novel was completed!

She received the Charles Hyde Pratt Award for Excellence in Creative Writing in 2010.

For more information on Michelle and her books, please visit www.michellemadow.com.

Michelle lives in Florida, where she is hard at work writing more novels for young adults.