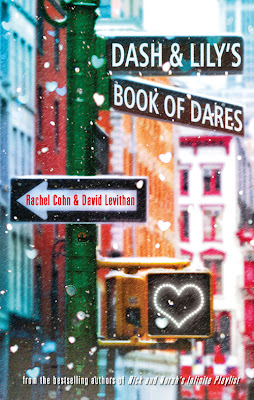 Title: Dash & Lily’s Book of Dares
Author: Rachel Cohn and David Levithan
Publisher: Harlequin UK Ltd (MIRA Ink)
Pub Date: Oct 5 2012
Format: ebook
Pages: 188 (376)
Genre: Contemporary, Romance, YA
Links: Goodreads ~ Amazon ~ Book/Author Site: David Levithan ~ Rachel Cohn
Synopsis: "I've left some clues for you. If you want them, turn the page. If you don't, put the book back on the shelf, please."
Lily has left a red notebook full of challenges on a favorite bookstore shelf, waiting for just the right guy to come along and accept its dares. But is Dash that right guy? Or are Dash and Lily only destined to trade dares, dreams, and desires in the notebook they pass back and forth at locations across New York? Could their in-person selves possibly connect as well as their notebook versions? Or will they be a comic mismatch of disastrous proportions?
Rachel Cohn and David Levithan have written a love story that will have readers perusing bookstore shelves, looking and longing for a love (and a red notebook) of their own.
Rating: 10/10
Source: Netgalley. A HUGE thank you to the publishers!
Cover Talk: I love the cover! I love snow and I love winters. Plus the signs and colors of the cover just look so… inviting! This cover would definitely catch my eye at a book store.

My Thoughts: I loved this book!! I could have finished it all in one go (and then spent the next day at school sleeping) but the power went out when I was half-way into the book (at 12 a.m) and then I had to go to sleep and look forward to finishing it when I got back from school. But when I did, I couldn't read it because after that I had to rush to a school function. Finally when I was done with all that (and very tired) I came back home and sat on my computer to read. But the power went out again (Booo!!). And then I spent the whole next day finishing my book instead of studying (I even missed school but since nothing much was going to happen, that was fine).

I was feeling depressed and frustrated because it’s my last year and the studies are getting really tough. I seriously needed a distraction which would put my mind at ease. But I didn't want to read a sad book because then that would make me more sad. So I decided to randomly pick a book. If I liked it through the first few pages then I would continue. If not, then I would read something else. Luckily, my first choice was Dash & Lily, and it got me hooked from the first line!

I loved the humor, especially in Dash’s chapters. This book had me laughing out loud at so many moments! I loved how David wrote Dash’s chapters and Rachel wrote Lily’s. It created a great diversity and gave each of the characters their own voice. So, the writing was simply amazing! I’m definitely checking out more work by both of these amazing authors.

The story was so good! It was a different and unique idea. I really loved the mystery of it all. How they lived in the same city but hadn't ever met each other, but still knew so much about each other just because of a notebook. How the notebook helped change their life. It made me wish something like this would happen to me too! I especially liked that even after they met, the notebook didn't disappear. It was still there. Because it was special.

I loved all the characters in this book. Dash & Lily were such relatable characters. They were real people. They went through things that you might have. And you could picture yourself as them. I felt like I was a lot like Lily in some ways. For example I stay in my own bubble and don’t socialize much. Neither do I take risks, just like Lily didn't in the beginning. The side characters were really lovable! I loved Lily’s extended family, all the characters added something special to the book. I really liked Dash’s friends, except Priya. She bugged me a lot! I don’t know why, she just did.

The romance ♥ Oh the romance was just perfect! Especially, considering what I was looking for. It was so sweet and swoony! I didn't want hot and heavy and I’m so glad I didn't get that! The romance was just so cute!! I loved the dashing Dashiell! I want a Dash! You know how girls usually like mysterious hot guys? I am one of those girls. But this trend is getting annoying. I mean EVERY book has a Damon Salvatore now a days! And I’m getting kinda tired of this. So I fell in love with Dash. He was a fresh change from hot & mysterious plus he loves to read!

This book was a great pick-me-up and I loved every bit of it! I would love to read it again! If you’re looking for a cute little romance with a little mystery in it, or are just looking for a good holiday read, then this is your book!

Favorite Quotes: Oh God, there are so many! I wish I could share them all with you! But since I can’t (

) I’m only going to mention a few here:

“I’m looking for Fat Hoochie Prom Queen,” I declared.
He did not respond.
“It’s a book,” I said. “Not a person.”
Nope. Nothing.

“Are you a teenage boy?
If yes, please turn the page. If no, please return this to where you found it.”
I was sixteen and equipped with the appropriate genitalia, so I cleared that hurdle nicely.

I turned to find Priya, this girl from my school, somewhere between a friend and acquaintance—a frequaintance, as it were.

Luckily, I always travel with a book, just in case I have to wait on line for Santa, or some such inconvenience.

Prayer or not, I want to believe that, despite all evidence to the contrary, it is possible for anyone to find that one special person. That person to spend Christmas with or grow old with or just take a nice silly walk in Central Park with. Somebody who wouldn't judge another for the prepositions they dangle, or their run-on sentences, and who in turn wouldn't be judged for the snobbery of their language etymology inclinations.

Maybe, I thought, it’s not distance that’s the problem, but how you handle it.

She led me into a room that could only be called a parlor. The drapery was so thick and the furniture so cloaked that I half expected to find Sherlock Holmes thumb-wrestling with Jane Austen in the corner.

It both mystified and intrigued me that such a seemingly dour person as Dash was great friends with an extremely exclamation-pointed person as excitable Boomer.

I need to keep my mind open for what could happen and not decide that the world is hopeless if what I want to happen doesn't happen. Because something else great might happen in between.

The important people in our lives leave imprints. They may stay or go in the physical realm, but they are always there in your heart, because they helped form your heart. There’s no getting over that.

And this was my favorite (swoony) scene:

“You really think love needs to have a future?”
“Absolutely.”
“Good,” Lily said. “So do I.”
“Good,” I echoed, leaning in. “So do you.”
“Don’t repeat what I say,” she told me, swatting at my arm.
“Don’t repeat what I say,” I murmured, smiling.
“You’re being silly,” she said, but the silliness was falling out of her voice.
“You’re being silly,” I assured her.
“Lily is the greatest girl who ever was.”
I drew closer. “Lily is the greatest girl who ever was.”
For a moment, I think we’d forgotten where we were.
And then the officers returned, and we were reminded once again.

RACHEL COHN & DAVID LEVITHAN have written three books together. Their first, Nick & Norah’s Infinite Playlist, was made into a movie starring Michael Cera and Kat Dennings, directed by Peter Sollett. Their second, Naomi and Ely’s No Kiss List, was named a New York Public Library Book for the Teen Age. For their third book, Dash & Lily’s Book of Dares, David wrote Dash’s chapters and Rachel wrote Lily’s. Although they did not pass the chapters back and forth in a red Moleskine notebook, they did email them to each other without planning anything out beforehand. That’s the way they work.
Rachel’s previous books include Gingerbread, Shrimp, Cupcake, You Know Where to Find Me, and Very LeFreak. David’s previous books include Boy Meets Boy, The Realm of Possibility, Are We There Yet?, Wide Awake, Love Is the Higher Law, and How They Met, and Other Stories.
For more information about Rachel and David, you can find them at rachelcohn.com and davidlevithan.com, respectively. You may also catch them in the aisles at the Strand.

David and I knew we were ready to write another book when we had two things:  (1) two names – Dash & Lily (which are connected to the iconic Nick & Nora names, if you can figure that one out), and (2) a fun premise – in this case, a scavenger hunt that would also be a way for two characters to play a game of cat and mouse with each other.  With those two things in place, the book pretty much wrote itself…with lots of help from characters like Boomer and Mrs. Basil E.  And what’s more fun than New York City at Christmas?  (Well, there are dividing opinions on that). Once we had these two things, we followed our typical writing process: He wrote a chapter, emailed it to me, and I picked up where he left off, with not much discussion along the way. We try not to discuss our books too much while we’re writing them so that readers can be as surprised as we are by what happens.
Posted by Unknown at 8:11 AM