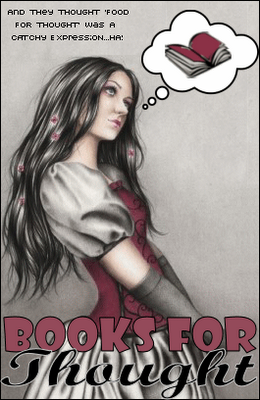 Books For Thought is a weekly meme hosted by LA Femme Readers.

Q. If one character could haunt you, who would you pick and why?

My Response: Jesse!! I would want no other character to haunt me except Jesse de Silva from The Mediator Series by Meg Cabot. He's a ghost but he's so sweet and hot and gentlemanly! He's my first ever book boyfriend and I still love him! I'm so jealous of Suze. :@ I want a Jesse! He can haunt me all he wants. ;)

What about you? Which character would you pick?
Posted by Unknown at 9:47 AM

Email ThisBlogThis!Share to TwitterShare to FacebookShare to Pinterest
Labels: books for thought, meme