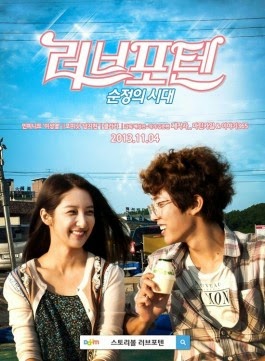 Synopsis: In the romantic comedy 'Please Remember, Princess,' Sungyeol plays the character Gi Yeok who devotes all of his love in order to win over his ideal type and the university's most popular girl, Min Ah, played by Jihyun. The drama will be based on the sensational story 'The Love Story of an Engineering Student.'

My Thoughts: I loved this drama! It's so cute and funny! But the best part is that it is so short that I was able to fit it into my busy schedule! I mean if you watch it non-stop you'll be over with it in about two and a half hours. But even for such a short drama, it's pretty good and memorable and you do feel connected to the characters.

Story: The story is really sweet, short and cute. It's easy to follow and there's humor but there's also sadness. Some parts are easy to relate to and I love the way it all plays out. If you want something practical then you should skip out on this one. But if you are okay with something absurd yet funny then you should definitely watch this!

Cinematography: I was very much impressed by the cinematography. Each scene was shot in such a way that it really brought out the feeling you, as a viewer, must be experiencing. I especially enjoyed that scene in which Gi Yeok and Min Ah are running to get to Min Ah's exam on time. The way they jumped from scene to scene was really fun to watch.

Actors/Characters: Everyone was great! I was very surprised with Sungyeol's acting! He did a wonderful job, both as Gi Yeok and the loan shark. Gi Yeok was so adorkable! I really enjoyed his character! Jihyun was good too, as Min Ah. Her acting wasn't mind blowing but she wasn't that bad either and her character was cute. All the side characters were so absurd and funny! Gi Yeok's friends were hilarious! I didn't even recognize Clara until I saw on MDL that she was in the drama! She was better here than in anything else I have seen her. She did a really great job! All the drama club folks were good (and funny) too and the guy who played Min Ah's husband did awesome acting!

Overall: This was a really fun drama to watch! I really enjoyed it. It has a cute story, good acting, and lots of humor! It's more on the mature side, in terms of the jokes and the language, but the content in itself is really sweet and reminds you of your first crush/love.