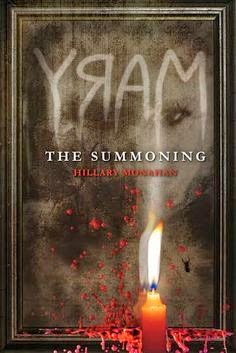 Synopsis: There is a right way and a wrong way to summon her.
Jess had done the research. Success requires precision: a dark room, a mirror, a candle, salt, and four teenage girls. Each of them--Jess, Shauna, Kitty, and Anna--must link hands, follow the rules . . . and never let go. A thrilling fear spins around the room the first time Jess calls her name: "Bloody Mary. Bloody Mary. BLOODY MARY." A ripple of terror follows when a shadowy silhouette emerges through the fog, a specter trapped behind the mirror. Once is not enough, though--at least not for Jess. Mary is called again. And again. But when their summoning circle is broken, Bloody Mary slips through the glass with a taste for revenge on her lips. As the girls struggle to escape Mary's wrath, loyalties are questioned, friendships are torn apart, and lives are forever altered.A haunting trail of clues leads Shauna on a desperate search to uncover the legacy of Mary Worth. What she finds will change everything, but will it be enough to stop Mary--and Jess--before it's too late?

My Thoughts: I have tried to write this review 3 times now but I can't seem to find the words to explain how I feel about this book. This is my fourth and last try, I hope I can get my meaning across.

Story: Honestly, I should have seen the friendship drama coming. It says right there in the synopsis "friendships are torn apart". In fact I was pretty sure it was going to be like this. But still I had hope that maybe I would be wrong. Sadly, I wasn't. And a lot of the book is spent on this friendship drama. Which annoyed and bored me very much! Don't get me wrong, maybe some of you might even like the friendship drama, but it just wasn't for me. I signed up for good horror not contemporary drama.

Other than loads and loads of friendship dramas there are also many scary parts. And most of them made my heart beat like crazy! Bloody Mary's description was perfect! It was, as Tsunami said, "as horrible, blood-drenched, revolting and deformed as possible". Sometimes the description was so creepy, it made me shudder! The scenes with Bloody Mary in them were definitely my favorite ones to read because they were so scary and good!

I really liked the mystery behind Bloody Mary. I have to say I was kinda expecting that twist in the end but still it was interesting to read Bloody Mary's history and I very much liked reading her letters. It made me feel closer to her and I was able to feel sorry for her.

Characters: Would it be weird if I said Bloody Mary was my favorite character? Yes? Well she was and I can't help that. The main characters of the book, though, are Shauna, Jess, Kitty, and Anna. *sigh* I'll be honest, I did not like these characters AT ALL! I could tolerate Kitty and Anna well, they seemed okay. But Jess and Shauna?! Ugh! Which sucks really because Shauna is the protagonist, the narrator. I was in her head and I couldn't stand her. She did not act natural. One time she is calm while everyone is panicking, the next she goes crazy. Sometimes she is so smart that she understands things in a second, which was very unbelievable. I mean when someone is falling through a window in front of you the first thing that happens is that either your mind goes blank or you realize you have to rush to save that person. I'm pretty sure you can't figure out Mary's motives while standing there watching your friend fall. And then the other times she is so dim that she doesn't get even the most obvious things. I mean that Jess thing, I saw it coming from a mile away! She right-out told Shauna what she was going to do and still Shauna was surprised! Sometimes she acted like a grown-up instead of a teenager, I would know since I am a teenager. Instead of worrying about the matters at hand she worried about useless stuff which made me so angry! She kept badmouthing and then defending Jess. And Jess is supposed to be her best friend...

Oh and talking about Jess, she is such a narcissistic, little, know-it-all! She got on my nerves! If she were my friend I wouldn't let her boss me and everyone else around. She is manipulative and a liar. Shauna says this herself. And yet she keeps forgiving her. She says "Jess messes things up but she makes up for them." I never once saw Jess making up for her messes. I just really didn't see Shauna and Jess as best friends. They could have been casual friends but I never saw that bond that exists between best friends. Their friendship just wasn't believable. And Jess was ccrrraaaazzzyyyy!!

Kitty and Anna were probably the best ones out of the four girls. They seemed like real people. Their reactions were natural, like mine would have been, and I liked them much better than Shauna and Jess.

Writing: As I said, Bloody Mary's description was great and the scary scenes were really good! But in terms of characters, I did not like the writing much. It was like instead of showing the characters' personalities, the writer was telling us. There was some showing too but it was very late into the novel. I wish she wouldn't have wrote their personality traits as if the reader is too dumb to understand. If she had shown the characters as they were, with their actions and dialogues, I would have figured out their personalities myself.

Sequel: This book is the first one in a series. Am I going to read the next book? I don't exactly plan on it but if it comes by and I have the time then maybe I'll check it out.

Overall: This book was a mix of two extremes for me. While I loved the Bloody Mary scenes, the friendship drama bored me a lot! I do realize though that other people might not have this problem with the book. So though I'm not going to particularly recommend it, I won't advise against reading it either. So the choice is yours. 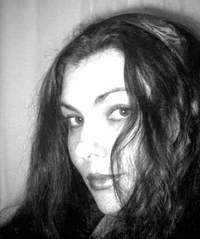 Hillary Monahan is Eva Darrows is also an international woman of mystery. Holed up in Massachusetts with three smelly basset hounds, she writes funny, creepy things for fun and profit.
Posted by Unknown at 10:36 AM