Title: Hanasakeru Seishounen
Writer: Natsumi Itsuki
Director: Chiaki Kon
Producer: Studio Pierrot
Main Cast (Voice Actors): Aya Endo as Kajika Burnsworth, Toshiyuki Morikawa as Fang Li Ren, Diasuke Ono as Eugene De Volcan, Diasuke Namikawa as Prince Rumaty, Jun Fukuyama as Carl Rosenthal
Genre: Drama, Romance
Original Run: April 5, 2009 - February 14, 2010
No. of Episodes: 39
Language: Japanese
Links: MAL ~ Wikipedia ~ Amazon
Synopsis: A very powerful industrialist directs his daughter to pick a husband from three candidates he has chosen for her. They are to come into her life, and their uniqueness would cause her to recognize them immediately. All three of the candidates are outstanding. Well, it’s actually four...
The story evolves along the lines of a power political mystery involving a small middle eastern country.

My Thoughts: I have watched A LOT of anime! I had this phase a few years back where I was addicted to anime and I think I've watched almost all kinds of them. But Hanasakeru Seishounen is unlike any. The story is very different and unique and though it's a bit unrealistic, it is very interesting. The story has a lot of different elements blended together nicely. There's romance but the story isn't all about that. There's a lot of action and politics too. There's deceiving and cunning schemes and suspense which was all nicely done. The flow of the story was maintained well and I really liked everything.

I hate it when a lot of boys like the same girl. Like all the other girls in the world are dead or that particular girl is so perfect that every boy in the world falls for her. But surprisingly, it didn't bother me much in this anime. I was OK with 4 guys falling for the same girl. Though it was not much of a surprise who she would chose in the end. It was obvious from the first episode. I really liked seeing how Kajika changed the lives of the three bachelors chosen by her father. The underlying themes of family and love were nice. It was also interesting to see the story of Raginei unfold. I don't like action stuff much but I liked it in this anime.

Kajika was a really strong, independent girl and I really liked her character a lot! She was annoying sometimes but that was only because I couldn't have dared to do half the things she did. None the less, she was likable and unique, unlike the "weak, helpless girls" which are the usual protagonist of anime. 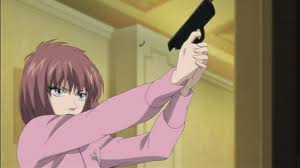 The boys were all gorgeous and it would've been hard for me to chose one too if I was in Kajika's place! Their personalities were different and I'm glad that they were shown to be more than just a pretty face. Their stories were sad and I liked seeing how Kajika mended their broken hearts. I also liked seeing the different forms of love portrayed in this anime.

Li Ren reminded me a lot of Sebastian (from Black Butler)! Sebastian is my favorite character of all time and not only was Li Ren's personality a little like Sebastian's but the way he was drawn and his expressions were a lot like his too. (Though Sebastian will always stay #1!) 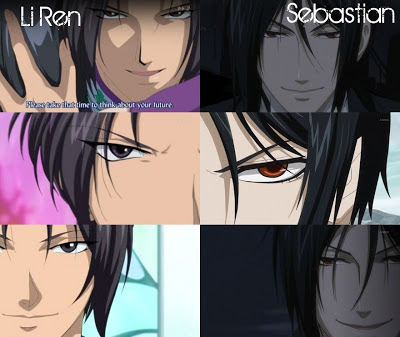 All the side characters were amazing too! I even liked the villains. My favorite side characters would be Isaac & Toranuske. They were really likable and amiable. I liked Quinza too. It was interesting to see his schemes and plans and anticipate what his next move might be.

This anime had a lot of stuff I don't usually watch but I still ended up liking it very much. I think this says a lot about the anime and I'd highly recommend it!
Posted by Unknown at 10:27 AM