Review-Harry Potter and the Chamber of Secrets 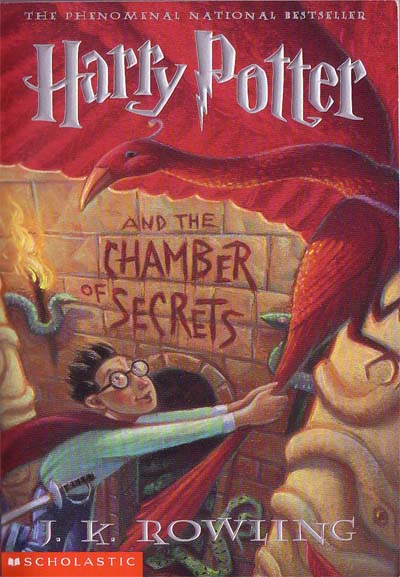 Summary: Ever since Harry Potter had come home for the summer, the Dursleys had been so mean and hideous that all Harry wanted was to get back to the Hogwarts School for Witchcraft and Wizardry. But just as he's packing his bags, Harry receives a warning from a strange, impish creature who says that if Harry returns to Hogwarts, disaster will strike.

And strike it does. For in Harray's secong year at Hogwarts, fresh torments and horrors arise, including an outrageously stuck-up new professor and a spirit who haunts the girl's bathroom. But then the real trouble begins-someone is turning Hogwarts students to stone. Could it be Draco Malfoy, a more poisonous rival than ever? Could it possibly be Hagrid, whose mysterious past is finally told? Or could it be the one everyone at Hogwarts most suspects.............Harry Potter himself!

My thoughts: Harry Potter. Enough said. Do I even have to review this brilliant book?

I loved it! And that about summarizes the way I feel about this book. I'll talk one by one about various aspects of the book so I can analyze them better.

First up, characters. I love the characters! They are believable and true (even if they are witches and wizards). Ginny's character at times irritated me. Not that it wasn't portrayed well or anything. People like that in real life irritate me too. I like a strong, independent female (like Hermoine) rather than a weak, always crying one (like Ginny). But J.K. Rowling showed Ginny really well as girls like Ginny do act the way Ginny does. Now, Gildroy Lockhart. I simply love to hate this guy! Why? I think anybody who has read/watched Harry Potter would know why. But I would never want him not to be in the books! He added a kind of charm and comedy to the book which wouldn't have been there if he wouldn't have existed.

Then comes the plot. Oh how I wish I wouldn't have watched the movie before reading the book! But the book explained me a lot things which I couldn't comprehend from the movie. I don't think I need to say anything more about the plot as we all know it is flawless!

I hate reading books with complicated English as English is not my first language so I don't know it very well. At least not those medieval words! I like that Rowling used simple, readable English. Her writing is beautiful as well as capturing. I like how she builds up the suspense. Her use of humor is genius and I laughed out loud at many occasions!

I think that's pretty much it. Overall, I think this book is perfect for all ages!
Posted by Unknown at 5:19 AM