In My Mailbox is a meme hosted by Kristi at The Story Siren and inspired by Bloggers[heart]books.

So I've been thinking of participating in this meme for a really long time. But I didn't get how it worked. Now I think have an idea. So lets begin my first ever IMM......

Lets see.....ok so here are the books I recently got. Kind of my TBR pile. They are not much, just a few. So here goes......I've written the summaries of the books (taken from Goodreads) and my thoughts on the books. (Note: The names of the books are linked to their goodreads pages.)


1. Harry Potter and the Camber of Secrets by J.K. Rowling

Summary: Harry's on summer break after completing his first year at the Hogwarts School for Witchcraft and Wizardry, and his aunt, uncle, and cousin are as mean as ever, trying at every turn to keep him from fulfilling his destiny as a wizard. Their efforts to prevent his return to Hogwarts are aided by an unknown force: a mysterious elf who shows up and warns Harry that he must never return to the school. Before departing, the elf performs a bit of mischievous magic that is blamed on Harry. As a result, Harry not only gets a stern warning from Hogwarts for using magic in the "real" world; he is also locked away by his aunt and uncle in a tiny closet beneath the stairs.

Harry is eventually rescued by his classmates and friends, the redheaded Weasleys, but getting back to Hogwarts still proves to be a challenge. When he finally does get there, his troubles quickly multiply. Someone has opened the door to the Chamber of Secrets, releasing a deadly monster with the power to kill. Several classmates turn up petrified, and in addition to trying to puzzle out who the culprit is, Harry finds himself a prime suspect. The truth lies down the end of a trail marked by a magical diary with invisible ink, a ghost who hides inside a toilet, a flying car, a pompous new teacher with a talent for hyperbole, and some ghastly giant spiders. When one of Harry's friends is imprisoned and another is turned to stone, Harry is forced to once again confront his archenemy, the Dark Wizard Voldemort, who has a whole new bag of nasty tricks up his sleeve.

Summary: Jesse's next move might be her last.
Jesse's latest secret assignment is to infiltrate a sleepover camp and locate two targets. One is a C2 agent working undercover. The other is a camper with "unusual skills" who has been placed at the camp by a vicious group called Nimbus. Jesse knows that the kid she has to find is some kind of threat, but information is scarce. What she uncovers turns out to be larger and more terrifying that she ever could have imagined.

My thoughts: I read the first book in this series a while ago and I loved it! I wanted to read the second book but couldn't find it. So I bought the third book. I'm still in search of the second book (it's hard to find books, where I live) and if I luckily get it somewhere I'm gonna read it first. If not then I'll read the third one.

3. The Alchemist by Paulo Coelho

Summary: PAULO COELHO'S enchanting novel has inspired a devoted following around the world. This story, dazzling in its powerful simplicity and inspiring wisdom, is about an Andalusian shepherd boy named Santiago who travels from his homeland in Spain to the Egyptian desert in search of a treasure buried in the Pyramids. Along the way he meets a Gypsy woman, a man who calls himself king, and an alchemist, all of whom points Santiago in the direction of his quest. No one knows what the treasure is, or if Santiago will be able to surmount the obstacles along the way. But what starts out as a journey to find wordly goods turns into a discovery of the treasure found within. Lush, evocative, and deeply humane, the story of Santiago is an eternal testament to the transformation power of our dreams and the importance of listening to our hearts.

My thoughts: I bought this book for school. My English teacher is a BIG Paulo Coelho fan and I've heard a lot of good things about this book. I'll give it a try soon enough. I did read the first few pages of the book but it didn't get me hooked. Maybe if I read further I'll start liking it......

4. My Family and Other Animals by Gerald Durrell 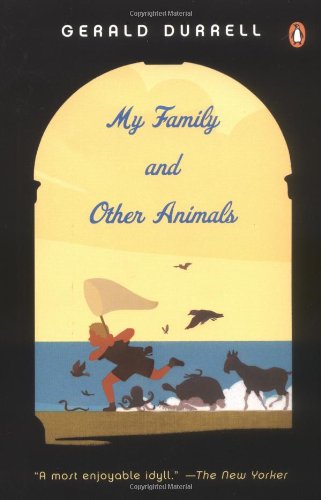 Summary: When the unconventional Durrell family can no longer endure the damp, gray English climate, they do what any sensible family would do: sell their house and relocate to the sunny Greek isle of Corfu. My Family and Other Animals was intended to embrace the natural history of the island but ended up as a delightful account of Durrell's family's experiences, from the many eccentric hangers-on to the ceaseless procession of puppies, toads, scorpions, geckoes, ladybugs, glowworms, octopuses, bats, and butterflies into their home.

My thoughts: This book was also bought for school. Actually I didn't get it recently. It was bought last year. But I never got around to reading it. Hopefully I'll finish it some day...........

Summary: On the afternoon of September 2, 1993, Greg Mortenson realized that he had failed in his attempt to climb K2, the world's second-highest mountain. But disappointment was the least of his problems. Emaciated, exhausted, thoroughly disoriented, and suffering from edema, his grip on life was loosening. He was taken in and nursed back to health by the impoverished populace of a remote Pakistani village. Grateful, he promised to return someday to build them a school. Three Cups of Tea is the story of that promise and the story of how one man changed the world, one school at a time.

My thoughts: The reason I bought this book was because it was about a place where I live. I've never read anything like that so I wanted to give it a try. Again, this is not a recent buy. It was also bought almost an year ago. But I decided to add it in the IMM anyway.

So what do you have in your mailbox? Comment below or post on your blog and drop the link of the post in comments. I'll be sure to drop by!