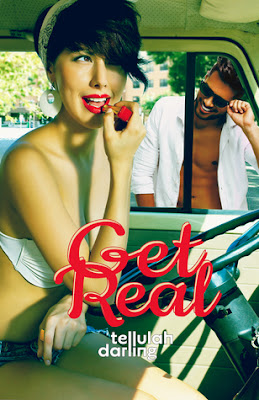 Synopsis: Get Real is a romantic comedy, urban fantasy whirlwind with sass, sex, and swoon, set in the world of “Cadabras"–humans with magical powers.
Francesca Bellafiore is a good Jewish girl, living up to family expectations that she use her magic to heal others. Underneath, she’s a wannabe badass with her heart set on becoming a detective and solving magical crimes. But nice girls don't disappoint their moms.Party boy Rafael Muñoz does everything possible to publicly disappoint his high profile father. Privately, it's a different story. His carefully crafted bad boy reputation masks the fact he’s a master illusionist, forced into solo covert ops. The role is wearing thin and Rafael longs to be part of a team.When Francesca meets Rafael at a friend's party, she's taken by the sexy stranger. Until he speaks. Beautiful plumage doesn't compensate for spectacular ego. Rafael finds Francesca's sweetness a turn-on. For about five minutes. Judgmental golden girls are more trouble than they're worth. Then a terrified girl with reality warping powers, locked and loaded on their destruction, whisks the pair to Manhattan. Francesca and Rafael are caught in a web of magic, minions, secrets, and enough sexual tension to power NYC. Desperate to prove themselves, their only chance to save the city and survive is to team up, trust each other–and maybe even fall in love.Provided they don't kill each other first.

Rating: 2/10
Source: Netgalley. Thank you to the author and publisher.
Cover Talk: I love the cover! It's so fun and sexy and instantly catches your eye!

My Thoughts: Let me just start by saying I love Tellulah Darling! I have read all her books and I have loved all of them! In fact The Blooming Goddess trilogy is one of my all-time favorite book series ever and I'm even planning on rereading it after I finish rereading The Mediator series. I love Tellulah Darling's witty writing and amazing characters! And she herself is such a nice person! So when I got Get Real from NetGalley I was ecstatic! I mean Tellulah Darling is one of my favorite authors! I would buy her books without reading the synopsis. So I was expecting another amazing book that would blow my mind. Sadly, I was highly disappointed with this one. It's not just that I had my expectations up high. This book just didn't seem like it was written by her. No honestly, I had to check a couple of times while reading to see if this was actually by Tellulah Darling or I had misread the name. Now this does not mean I don't like her books anymore or that I would stop reading them. I still trust her and I'm pretty sure she'll soon come up with something I will love. But unfortunately, this one wasn't for me. And now I'll tell you why.

Story: Oh wow, I finished the book a couple of hours ago and I can tell you I have no idea what just happened. I don't understand the world of Cadabras at all. I didn't get the "powers" and the whole Minna business just whooshed over my head. I seriously had no idea what was going on most of the time and I had to reread pages to kinda get a clue of what was happening. I don't know if it was my fault or that the world building wasn't that good. I mean, I seriously did not understand what happened in more than half of the book. If you ask me to give you a summary, I wouldn't be able to tell you what went down. It was all so weird and confusing that most of the time I had this expression on my face:

Also, there wasn't a lot of difference between Francesca's and Rafael's chapters. I sometimes forgot who's chapter I was reading and who's voice I should have in my mind. As I said before, the world building wasn't good and I had a hard time picturing anything in my mind.

Characters: None of the characters was at all memorable or likable. Most of them were annoying or boring. I really did not like Francesca at all! She was whiny and mean and irritating. She made me so angry! I was okay with her at first. I mean people change over the course of a book. And she did in some ways. But none of them were good! She just became ever more irritating! To the point where I just wanted her to leave. She frustrated me so much!

Rafael wasn't any better either. He was tolerable but annoying and even though I tried liking him, I just couldn't. I do prefer him to Francesca. At least he wasn't as stupid as her. But he wasn't at all memorable. Just like the rest of the characters in the book. I still don't understand Minna at all except that she made me go

many times. I don't really remember the rest of the characters much so I can't say anything about them.

Romance: Romance was the only thing about the plot I understood. Do I ship them together?

They were not good for each other. Not only did Rafael deserve better, I just didn't feel any chemistry between them. There was no build up, no get-to-knows, no friendship. Just a lot of sexual tension, And that never works for me. Both of them were just very frustrating and annoying.

Overall: I'll say it again, I love Tellulah Darling. I'm not saying this because I feel bad for writing this review (which I kinda do) but because I don't want to keep you from her other amazing books because of this review. Seriously, go check them out! And if Get Real interests you, then check this out too. Maybe you'd like it better than I did. But I personally wouldn't recommend this book. It just wasn't for me.

Tellulah Darlingnoun1) YA & New Adult romantic comedy author because her first kiss sucked and she's compensating.2) Firm believer that some of the best stories happen when love meets comedy and awkwardness ensues.3) Sassy minx.Both a hopeless romantic and total cynic, Tellulah Darling is all about the happily-ever-after, with a huge dose of hilarity along the way. Her romcoms come in a variety of heat levels and flavors; straight up romantic comedy, shaken with Greek mythology or stirred with urban fantasy.Sassy girls. Swoony boys. What could go wrong?