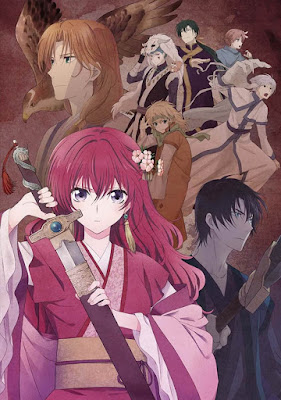 Synopsis: Princess Yona lives a life of luxury and ease, completely sheltered from the problems of the seemingly peaceful Kingdom of Kouka; however, the sudden murder of the king and betrayal of her beloved cousin Su-won places Yona's life in mortal peril. Forced to escape only with Son Hak, who is both her childhood friend and bodyguard, the naïve princess soon discovers that Kouka is not the idyllic place she envisioned it to be. Poverty, strife, and corruption run rampant, making reclaiming the throne nothing more than a wishful fantasy given the kingdom's current state.
Based on the popular manga of the same name by Mizuho Kusanagi, Akatsuki no Yona follows Princess Yona on a coming-of-age adventure as she faces the harsh realities of her kingdom. With only a mysterious legend to guide her, Yona must discover a way to restore Kouka to its former glory while being pursued relentlessly by the forces of the new King of Kouka.

Story: The story was amazing and extremely well-written and thought-out. It had comedy, romance, action, drama, tragedy. Basically it was a perfect blend of everything and I loved every minute of it! From start to finish it was an intriguing adventure and I loved going on this adventure with these amazing characters. I really like how the romance was more of a subplot and the story was very character driven.

Animation: I loved the animation! Not only were the characters nice to look at (Hak!!! <3) but the landscapes were extremely beautiful! I'm very picky about the animation but I was very happy with it in Akatsuki no Yona.

Characters: All the characters were well-developed and each had his own backstory. I loved all of them! I've never been so attached to a character as I was to Yona! I was cheering for her so hard throughout the anime! And I was so so proud of her! That arrow scene blew my breath away! One of the most amazing scenes I have ever watched! Yona started out as a selfish, clueless girl but by the end of the anime she was a completely different person. I loved watching her grow and change like that!

I loved Hak and how much he cared for Yona! I loved his relationship with her. How he supported her and pushed her and protected her. I really liked his backstory and he was an amazing character. So were all the other supporting characters. The dragons and Yun. They weren't only there just as supporting characters or love interests. They all had a complete character arc and I got really attached to all of them. Most of their backstories made me cry and I really loved each of them.

Suwon was a very complex character. He cared about Yona and even Hak and I think he truly believed what he was doing was right but he went about it the wrong way. He was smart and cunning which I liked about him and I do like him very much as a character but it took time for him to grow on me.

Overall: Akatsuki no Yona was one of the most amazing anything I've ever watched and I highly recommend it. The only problem is that it isn't complete which of course is a problem with almost every anime based on manga. I don't know if there will be a second season or not but I'm tempted to read the manga to find out what happens next.