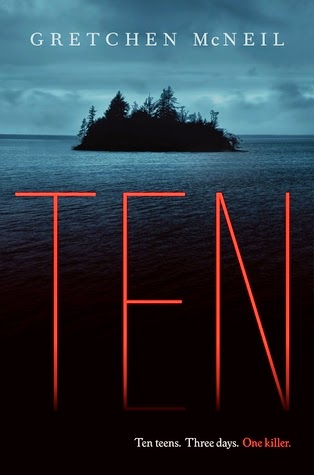 Synopsis: SHHHH!
Don't spread the word!
Three-day weekend. Party at White Rock House on Henry Island.
You do NOT want to miss it.It was supposed to be the weekend of their lives—an exclusive house party on Henry Island. Best friends Meg and Minnie each have their reasons for being there (which involve T.J., the school’s most eligible bachelor) and look forward to three glorious days of boys, booze and fun-filled luxury.But what they expect is definitely not what they get, and what starts out as fun turns dark and twisted after the discovery of a DVD with a sinister message: Vengeance is mine.Suddenly people are dying, and with a storm raging, the teens are cut off from the outside world. No electricity, no phones, no internet, and a ferry that isn’t scheduled to return for two days. As the deaths become more violent and the teens turn on each other, can Meg find the killer before more people die? Or is the killer closer to her than she could ever imagine?

My Thoughts: Despite this book being very slasher-film-esque, I enjoyed it a lot! I really don't like slasher-films. They have too much gore and not enough brains. I prefer psychological thrillers for my horror fix. Despite all that, this book wasn't bad. It had all the slasher-film cliches: a bunch of teens in a remote place, no communication to the outside world, and they start dying one by one. Even my mom was like 'Isn't that a typical horror movie story.' Yes, it is. It has been done so many times that I'm pretty sure you will be able to guess who the killer is from the start. Even then people enjoy these kind of stories. And I did too.

Story: The book was fast-paced and had a lot going on. There wasn't any dull moment and I liked the rush of it. I liked not having to use my brain and just go with the flow. There were many plot holes but as with any slasher-film, they didn't matter much. I didn't like the romance. I like my horror without romance. That is why I didn't enjoy the romantic scenes much. But the rest of it was good. There were some scenes that scared me and overall the book kept me really invested.

Writing: I actually really liked the writing. It was easy for me to envision the scenes as they were described really well. The pacing was good and the suspense was handled well.

Characters: I didn't really care much about any of the characters which is a good thing because that's how slasher-films are. They were stereotypical and sort of predictable. But I did enjoy them.

Overall: Ten was an enjoyable book. Especially if you are looking for a fast-paced, slasher-film-like thriller. The story is interesting and suspenseful and keeps the reader hooked. 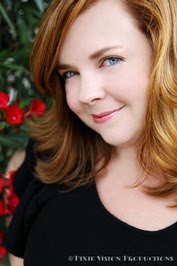 Gretchen McNeil is an opera singer, writer and clown. Her YA horror POSSESS about a teen exorcist debuted with Balzer + Bray for HarperCollins in 2011. Her follow up TEN – YA horror/suspense about ten teens trapped on a remote island with a serial killer – was a 2013 YALSA Top Ten Quick Pick for Reluctant Young Adult Readers, a Romantic Times Top Pick, a Booklist Top Ten Horror Fiction for Youth, a finalist for the 2015 Evergreen Young Adult Book Award, and was nominated for "Best Young Adult Contemporary Novel of 2012" byRomantic Times. Gretchen's 2013 release is 3:59, a sci-fi doppelganger horror about two girls who are the same girl in parallel dimensions who decide to switch places. Gretchen's novels have been optioned by Hollywood production companies, and have sold internationally in Chinese, Spanish, and Turkish.In 2014, Gretchen debuts her first series, Don't Get Mad (pitched as "John Hughes with a body count") about four very different girls who form a secret society where they get revenge on bullies and mean girls at their elite prep school. The Don't Get Mad series begins September 16, 2014 with GET EVEN, followed by the sequel GET DIRTY in the summer of 2015, also with Balzer + Bray. In addition, Gretchen has contributed an essay to the Dear Teen Me anthology from Zest Books.Gretchen is a former coloratura soprano, the voice of Mary on G4's Code Monkeys and she sings with the LA-based circus troupe Cirque Berzerk. Gretchen blogs with The Enchanted Inkpot and was a founding member of the vlog group the YARebels. She is repped by Ginger Clark of Curtis Brown, Ltd.You can find Gretchen on Twitter, Facebook, and on her blog.
Posted by Unknown at 12:21 PM