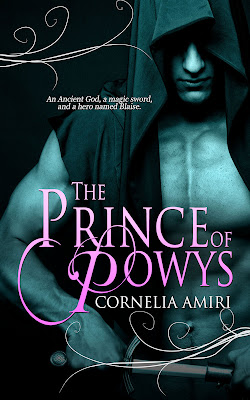 The Prince of Powys by Cornelia Amiri

The Anglo Saxon Chronicles records in the year of our lord 750, Cuthred of Wessex fought Ethelbald of Mercia. It not only states that these two Saxon War Lords battled each other but that they both battled the Welsh. In 760 in the Battle of Hereford, Elisedd map Gwylog of Powys and his son Brochfael map Elisedd led the Welsh to victory  against Mercia. Elisedd’s great-grandson, Cyngen map Cadell built a monument to Elisedd known as the Pillar of Eliseg. It stands to this day. From the dark ages, the time of warrior kings like Ethelbald, Cuthred, and Elisedd springs my young adult tale of The Prince of Powys.
Branda, a Saxon princess of Mercia helps Blaise, a prince of Powys, escape her father’s stronghold. In turn, he vows to escort the princess to her sister in Scotland so she can escape an arranged marriage. Instead, he holds her captive as his hostage in the unbreachable hill fort of Dinas Bran, where she captures his heart. Will Blaise be forced to throw away his honor for love or tear out his heart for honor?

Here’s a short excerpt:
After sleeping off the ale, he rose at dawn recommitted to keeping Branda, and prepared for his mission in the old ways.

Scan bore the woad and the limewash Neilyn had mixed. Blaise washed his hair with the powdered limestone and water mix then spiked his mane until it stood as thick as a hedgehog's coat. With the woad dye, Neilyn painted magic symbols of the gods upon Blaise's forehead. Painted tattoos liken to the sacred images engraved on the long stones in the tombs. The swirls began small and curved into larger loops. The gods shielded him with these mystical symbols.

The druid chanted ancient words of power as Scan strummed the harp.

"Before the sky and the earth and the sea,
Before the sun and the moon and the stars,
I place a circle of safekeeping around you.
Oh Blaise, bind yourself to Bran's power,
mighty is its strain, oh Blaise.
Magical energy will enliven,
And empower you on the field of battle.
Thrust the Saesneg with the sword of Nuada.
Around you, I place a circle of protection,
To bind Bran's power to you, oh Blaise."

Scan continued to strum the harp and Neilyn drew blue circles upon Blaise's legs, arms, and chest as he continued the enchantment.

"Win your princess as Bran foretold,
So the two of you shall return to us,
To live a life full of honey,
With peace as ample as the sky.
Be this nine times eternal.
I place a circle of protection around you.
Oh Blaise, bind yourself to Bran's power."

Blaise picked up a bronze mirror adorned with Celtic tracery. The image of a warrior prince painted with the magic of the old gods gazed back at him. Pride and determination filled him with a warm glowing sensation of peace and invincibility.

Before he vaulted onto his steed, Neilyn presented him with Nuada's sheathed sword of power. Blaise drew the blade from the serpent etched sheath. The gleaming bronze hilt, curved in never-ending circles of life, mesmerized him as rays of sunlight danced upon the long, powerful sword, which glistened with an ethereal luster.
Neilyn bent his head down and kissed the gleaming blade. Blaise brandished it high in the air as Brochfael, Elisedd, and all the gathered Cymry praised its power.

For more on my young adult fantasy/romance, The Prince of Powys, please visit my publisher’s site at  http://www.eternalpress.biz/book.php?isbn=9781615725823
and my website at http://CelticRomanceQueen.com

Enter below to get a chance to win a Celtic leather bracelet and an autographed paperback copy of The Prince of Powys!

a Rafflecopter giveaway
Posted by Unknown at 2:53 PM

Email ThisBlogThis!Share to TwitterShare to FacebookShare to Pinterest
Labels: giveaway