So good news is that I have internet here!! =D That means I can blog!

Now, this isn't a book-related post but I'm a big Avatar fan and the season finale of Legend of Korra aired yesterday and I wanted to fan-girl about it so here goes.... (Note to people who haven't seen it yet, don't worry there aren't any spoilers)

First of all, are there any Korra fans out there? If yes, then what did you think of the first season??

Here's what I thought: at first I didn't like it much. I mean I LOVE Avatar. Like seriously I'm a BIG fan. But Korra seemed boring to me in the beginning. Everything was so slow. And the graphics were too dark.

But then as I watched further I started liking it. The story was great. I did't really like the pro-bending stuff and whenever there was a match scene I couldn't wait for it to be over (I'm not much into sports). But the Equalists and Amon and everything were incredible. How the story folded out, the mystery of who Amon really was and how it was all revealed in the season finale.

Korra's a strong character. She's a tom-boyish kinda girl and I really like that about her. She's headstrong and determined but she has a hard time being patient.

The other characters in the show were good too. Tenzin's kids were adorable! And Tenzin himself was a great character. Bolin is just so sweet. And Mako is so hot!! All in all I liked all the characters and their stories.

Now the romance. To be honest, I liked Mako better with Asami. And the Korra-Mako relationship 'just happened'. I mean at first they were so distant and then suddenly the 'loved' each other. I don't know why but I didn't buy it. And while we're on the topic I didn't like Aang with Katara or Zuko with Mai either. I guess I don't enjoy the romance in the Avatar series =P 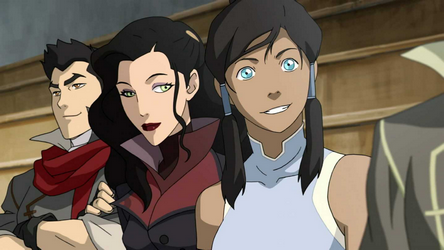 The finale was awesome! And the best part was it wasn't open-ended. Oh and hearing Zuko's voice was like music to my ears! <3 Zuko's voice is the hottest voice I have ever heard and when I came to know that Dante Basco (the guy who voiced Zuko) was going to voice a character on Korra I was thrilled! And the character he voiced was Zuko's grandson General Iroh who obviously did have Zuko's good looks ;)

I can't wait for the next season! No word on when it's airing but I heard that half of it will be in Republic City and the other half, around the world. That means travelling! Yaay!

I'll leave you with this cute Mako-Korra kiss at the end of the finale. Though I didn't like their romance but now that they are together, they look kinda cute, don't they?